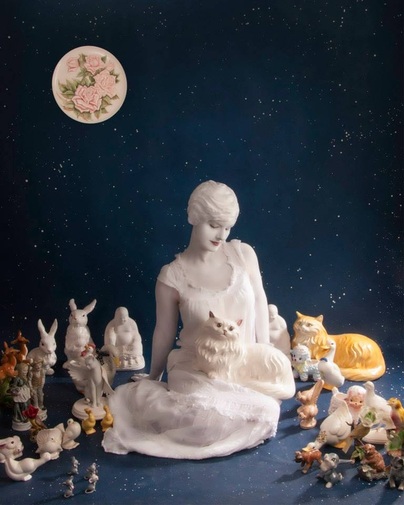 Biography
​
​Debra Broz collects and deconstructs secondhand ceramic kitsch figurines, then combines them into reimagined versions of their former selves. Using ceramics restoration techniques, she effaces history by creating seamless reconstructions that are part humor, part mad science, and part tender sentimentality for the rural Midwest where she grew up. In her larger works, she creates domestic installations that combine her reconstructed figurines with sculpture made from disassembled secondhand stuffed toys and discarded furniture.

Broz was born in 1981 in Springdale, Arkansas, and was raised in rural central Missouri. She received her BFA with honors from Maryville University - St. Louis in 2003. Shortly thereafter, she moved to Austin, Texas where she trained as a ceramics restorer and began using ceramic figurines in her art practice. Broz moved to Los Angeles in 2014, and then to Seattle, Washington in 2022. Broz shows with Track 16 Gallery in Los Angeles and Paradigm Gallery in Philadelphia, and has had exhibits at the American Museum of Ceramic Art, Austin Museum of Art, and Houston Center for Contemporary Craft. Her work has been featured in print in Ceramics Monthly, American Craft, and Frankie magazines; in a number of online publications; and in two international surveys of contemporary ceramics.
​
To see her restoration work please visit www.scienceofartrestoration.com.